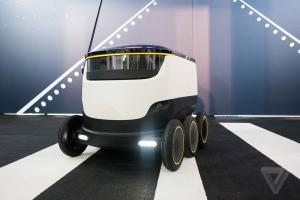 NEW YORK, NY, UNITED STATES, September 17, 2019 /EINPresswire.com/ — Global autonomous delivery robots market is expected to grow at a CAGR of 14.5% over the forecast period 2016-2024. These are the findings of study on Autonomous Delivery Robots conducted by Goldstein Research, a leading market intelligence & consulting firm.

According to Goldstein Research, Autonomous delivery robots have recently marked their presence in multiple end-use industries and the emerging technologies such as IoT (Internet of Things) and artificial intelligence technology tends to drive the growth of the market. Autonomous delivery robots market segmentation has been carried out on the basis of product type and end-users. Based on product type, semi-autonomous robots segment is expected to dominate the market for their faster deployment on roads as they face fewer challenges from regulatory authorities as they are remotely monitored and controlled by the service providers. Global autonomous delivery robots market is dominated by Europe with Germany and U.K expected to grow at 5.0% annually in Western Europe. North America is expected to closely follow Europe owing to favorable government policies framed recently in some districts of United States.