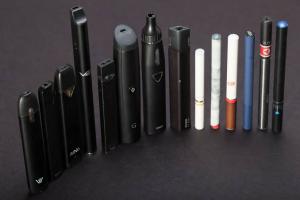 Market Overview
The e-cigarette market was worth USD 11.26 billion in 2018, and it is projected to reach USD 18.16 billion by 2025, at a CAGR of 8.28% over the forecast period (2019-2025). With the increasing trend toward e-commerce, online retailing is also emerging as a strong distribution channel in recent times and is expected to grow further, thereby increasing the value of distribution channels. Many ex-smokers need a high level of nicotine concentration, it is likely that the pods will typically come with the more potent nicotine salt (nic-salt) e-liquids, which may increase the peak concentration of nicotine in the blood and allow users to achieve more satisfaction and would become a popular alternative to the standard e-liquid.

Cost-effectiveness of disposable models of e-cigarettes, as well as cartridge models, which are rechargeable and contain pre-filled cartridges, are reasonably affordable and are considered to be beneficial in the long-term compared to traditional cigarette smoking. This remains a key driver for the e-cigarette market.
Due to increasing health concerns among the smoking population, the market is driving toward the e-cigarette model, which is considered to be less toxic and safer than conventional tobacco cigarettes.
While e-cigarettes have been growing in popularity across the world, they are known to pose a number of challenges to public health. E-cigarettes contain nicotine and their increased consumption can lead to nicotine addiction in young people, which can seriously affect brain development.

In our market size and forecast determination efforts, an extensive secondary research was initially completed to gain a good perspective of the market in each region. Extensive primary research was also carried out by interviewing the key executives from the industry. These interviews helped us to fill-in the data gaps after secondary research. Several secondary sources such as encyclopedia, directories, and databases have been used to identify and collect information useful for this extensive techno-commercial study.

Executives in marketing, strategic planning and new Type development will find such discussions in our reports pertinent and useful. Management consultants, investment bankers, manufacturers, distributors, suppliers, and regulatory authorities are amongst our regular clientele served.

KEY FINDINGS FROM THE REPORT

– China is currently the manufacturing hub, exporting more than 80% of the e-cigarettes and accessories produced to the US and the European markets.
– NJOY, Reynolds American, and Imperial Brands are the leading players in E-Cigarette market.
– Sprout Intelligence expert team estimated the global E-Cigarette market in 2015 was worth more than USD 12 billion.

Scope of the Report

Electronic cigarette (e-cigarette) is the most commonly used tobacco product among youth. There is wide variability in e-cigarette terminology, product design, engineering, and solution components (i.e., electronic liquid [e-liquid]). Many large enterprises, realizing the potential of e-cigarettes, have invested significantly in this industry. The e-cigarette value chain has been segmented into manufacturing, packaging and labeling, distribution, end-users, and aftersales.

The rise in e-cigarette use is likely because of the recent popularity of e-cigarettes offerings in a wide variety of flavors and in different shapes like a USB flash drive, such as JUUL. Evolving consumer taste is driving diversity in e-liquid flavors across the world, with tobacco, botanical, and fruit flavors being the most popular.
These products can be used discreetly, have high nicotine content, and come in flavors that are highly appealing to the youth. Compared to adults, a larger proportion of adolescents prefer fruit, alcohol, and other-flavored e-liquids.
In addition to the vast selection available online, thousands of vape shops have now opened that allow consumers to sample and purchase refill liquids, including a combination of flavors chosen by the user and in varying levels of nicotine. Flavors range from simplistic menthol and cinnamon, and sweet varieties, such as chocolate and vanilla, to complex flavors that are formed by mixing different varieties in fixed compositions. Customization in flavors is also a recently evolving trend, in many markets.
Europe to Hold a Significant Market Share

Europe is the largest market for e-cigarettes in the world, led by countries, like the United Kingdom, Germany, France, and Russia. The penetration of these products is particularly high in the United Kingdom and France, due to a high demand from users in the age group of 30-44 years. Vaping is taking center stage and providing the same level of satisfaction, causing e-cigarettes to provide intense rivalry.
Tobacco companies, such as UK British American Tobacco PLC (BAT) and Imperial PLC, are investing billions of dollars into research, development, and marketing cigarette alternatives, owing to the decline in the popularity of traditional smoking methods.
Competitive Landscape

The e-cigarette market is moving toward a fragmented market scenario, as the intensity of competitive rivalry has been on the rise over the past few years, owing to the multiple number of large and established organizations that have entered the market. Increasing firm concentration ratio and advertising expenses by companies are also heightening the competition. Key players are Philip Morris International, Healthier Choices Management Corp. (Ruthless Vapor Corp.), MCIG Inc., etc.

Customization of the Report