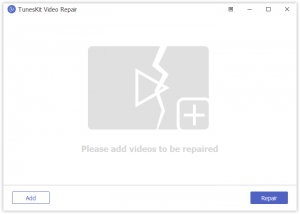 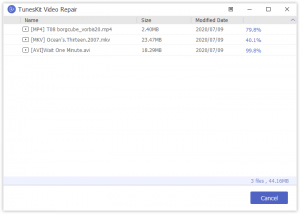 TunesKit has just rolled out its new app Video Repair, which will help Windows and Mac users fix all kinds of video corruptions, including MP4, MOV, AVI, etc.

We know that video matters, especially the ones that record the important moment of our life. That's why we have developed such a useful tool to help people solve the trouble.”
— Williams, Director of TunesKit R&D Team

KOWLOON, HONGKONG, CHINA, September 18, 2020 /EINPresswire.com/ — The innovative software provider TunesKit Studio, has recently announced the launch of its new utility software named TunesKit Video Repair. It's a powerful video repair tool that can help users repair any corruption of your video files, such as blurry, frozen, or flickering videos, out-of-sync, black screen or videos that cannot be played, etc. Both Windows and Mac versions of the application have been released at this time.

More importantly, TunesKit Video Repair is an easy-to-use program with an extremely simple design. The repair process can be done with 3 steps only. First, just add the corrupted videos for repair, then click the Repair button to start the fixing, and finally preview and export the repaired files to your computer. Anyone can easily operate it, no technical skills required.

TunesKit Repair for Video offers three different pricing plans for users. It includes a Single License at $39.95, which can only be used on one computer; a Family License at $59.95 for 2~5 computers, and an Unlimited License at $79.95 for use on any computer without limitation. Of course, it also offers a free trial version for users to have a try before purchasing. However, users are not allowed to export the repaired videos with the trial version. If you want to save the repaired video files, you need to upgrade to the full version.

In terms of the availability, TunesKit Video Repair software is fully compatible with both Mac and Windows systems, including almost all versions such as the latest macOS 10.14 Mojave, and 10.15 Catalina as well as Windows 10. You can download the trial version for free before purchasing!

TunesKit Software is a professional software provider, dedicated to offering easy-to-use yet powerful multimedia software and iOS utilities for Windows and Mac users. Currently, the company has already developed some popular programs such as media converter, video cutter, video converter, screen recorder, iOS system recovery, iPhone data recovery, and some other freeware. And all its products have received numerous satisfied users from more than 150 countries all over the world.

How to Fix Corrupt MP4 Videos with TunesKit