California-based Electro Scan Inc. Wins the Prestigious “Leak Detection Solution of the Year” Award for 2021 as the first technology to accurately locate & measure leakage in Gallons per Minute or Liters per Second. 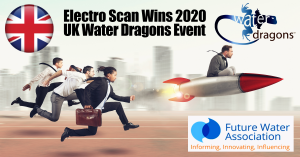 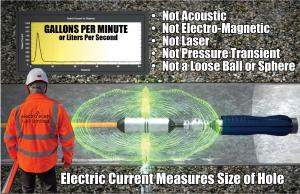 Electro Scan’s disruptive technology is a departure from traditional listening for a leak. Instead precisely measuring each size of hole, by location and severity expressed in GPM or LPS. 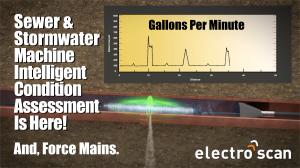 Electro Scan represents the only supplier that is able to find & measure leaks in both pressurized and gravity water and sewer pipelines. 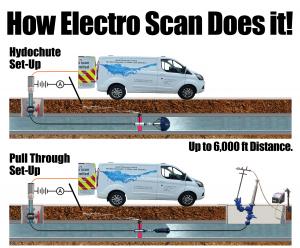 Electro Scan can find & measure leaks either with or without pressure, ranging from ZERO to 175 psi.

The Company's leak detection technology allows utilities to 'STOP' listening for leaks and 'START' using machine-intelligent sensors to measure the size of holes in all pressurized and gravity pipes.”
— Electro Scan Inc.

The Company's breakthrough technology allows utilities to 'STOP' listening for leaks and 'START' using machine-intelligent sensors to measure the size of holes in pressurized and gravity pipelines.

The company’s technology is also the first to measure leak severities in Gallons per Minute or Liters per Second.

Precise leak locations and quantification represents the 'holy grail' for the water industry that has never before been accomplished by other commercial suppliers.

As experts acknowledged limitations of current solutions, Hansen learned of acoustic devices that attempted to assess the presence of leaks from inside a pipe; often allowing severe leaks to go undetected.

In some cases, catastrophic failures occurred soon after internal acoustic inspections had issued a clean bill-of-health on pipes with 'NO LEAKS.' In others, untethered acoustic balls were lost, sometimes causing major equipment damage.

When water pools around a leak, an insulation condition is established that can suppress leak noises from inside the pipe, making them difficult or impossible to hear or see.

Recently a large European water company repaired several kilometers of older pipeline where it had found over 20 major leaks.

Upon excavation, it was determined that poor pipe installation and construction were responsible for the large leaks.

This suggested that typical Desktop AI programs that use available pipe data, such as age, material, diameter, and soil conditions to schedule pipe replacement programs, may not be suitable to plan future capital expenditure (CAPEX) programs.

"After several start-ups focused on this area, utilities soon realized that AI & ML can't overcome what can't be seen or can't be heard. As a result, new technology, like Electro Scan's machine-intelligent solutions, were needed," continued Hansen.

According to Frost & Sullivan, the Global Smart Water and Wastewater Leak Detection Solutions Market was valued at $1.23 billion in 2020 and is expected to reach almost $2 billion by 2026.

Deciding to pursue a next generation machine-intelligent approach to leak detection, not based on legacy acoustic or visual technologies, Hansen wanted to eliminate external background noise, flow rates, and pressure variations that cause misleading results; or worse, give false-positive readings during inspection.

In addition to using a low voltage electric current in a tethered probe configuration to pinpoint leak locations, Hansen wanted to adopt multi-physics orifice equations to quantify the severity of each leak.

By measuring the size of each leak's opening or hole, algorithms could simultaneously and automatically calculate defect flows in Gallons per Minute or Liters per Second.

Over the past 40 years the world’s population has doubled and water use quadrupled. Moreover, the global middle class is expected to surge from 1.8 to 4.9 billion by 2030, which will only drive a significant increase in freshwater consumption.

Unnecessary water losses from raw and potable distribution networks are no longer acceptable.

"The acoustic leak detection market has needed to be overhauled for some time," states Mike Condran, PE. "Well-documented acoustic sensor limitations occur because too often pipe leaks don’t always reach detectable noise thresholds or are obscured by ambient/background noises that cannot be eliminated.

"In fact, leaks that might be detected cannot then be quantified,” continued Condran.

In contrast to using sensory-based pipe leak detection techniques where readings must be manually interpreted by third-parties, Electro Scan’s IoT breakthrough takes a machine-based approach that precisely locates and quantitatively measures the size of any leak's opening, and which is not dependent on ambient noise levels, operating pressure or flow, and then automatically calculates defect flow rates.

While the global water & sewer leak detection market has traditionally relied on sensory-based acoustic and visual methods, helium has been injected into pipes to trace odors above ground, again without locational accuracy or severity.

Electro Scan's 2020 first place finish at the UK's Water Dragons Competition was an additional factor in judging it as IoT Breakthrough's 'Leak Detection Solution of the Year.’

ABOUT IoT BREAKTHROUGH AWARDS
The mission of the IoT Breakthrough Awards program is to recognize the technology innovators, leaders, and visionaries from around the globe in a range of IoT categories, including Smart City technology, Connected Home, Connected Car, and many more. This year’s program attracted more than 3,850 nominations from companies all over the world.