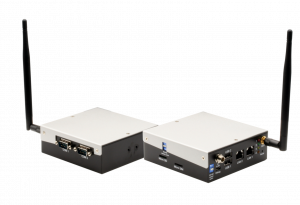 The SRG-3352C from AAEON is built for connecting Edge Networks in Smart Factories, Smart Cities, and more.

The SRG-3352C from AAEON is built for connecting Edge Networks in Smart Factories, Smart Cities, and more.

The SRG-3352C builds upon the features, durability and reliability of the SRG-3352 Edge IoT Gateway System with expanded support for more connections and wireless communications. All of this is packed into a compact form factor that makes deploying the SRG-3352C even easier, powering more flexible edge network deployments.

The SRG-3352C is powered by the Arm® Cortex-A8 800 MHz RISC processor. This innovative processor reduces the energy requirements of the system, allowing for a more efficient system to help save electricity costs. While powerful enough to connect edge networks together, the low energy usage can help cities with achieving green energy goals, and even allow the system to operate on solar power or batteries. It also eliminates the need for dedicated heatsinks, allowing the system to operate in wider temperatures, from 0°C up to 60°C without loss in performance.

The SRG-3352C is designed to provide a great value and cost-effective platform not only with initial investment, but also in long term costs. With rugged design and Arm processor, the system provides stable and reliable operation, reducing maintenance needs. To connect from edge to cloud, the SRG-3352C features built in Wi-Fi, as well as support for 3G/4G LTE and NB-IoT to help reduce bandwidth costs.

The SRG-3352C is designed to provide a flexible platform for connecting with a wide range of edge nodes and sensors. Built in connections include two COM ports, two USB 2.0 ports, two Gigabit Ethernet ports, and an RS-232/422/485 expansion slot for Digital I/O, Isolation RS-485, CANBus, Zigbee and IO-Link wireless support. For more flexible installation, optional mounting kits including din-rail and VESA mounts make it even easier to deploy the SRG-3352C where it’s needed most. The SRG-3352C is compatible with popular cloud services including AWS, Azure, and Arm Pelion, or can be configured to work with a customer’s own cloud platform.

AAEON offers customers total end-to-end support to deploy their edge networks, from hardware like the SRG-3352C and SRG-3352 to helping build and design edge networks from the ground up. AAEON also offers customization and OEM/ODM services to help build the edge network solution customers need.