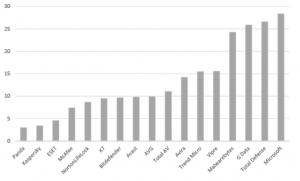 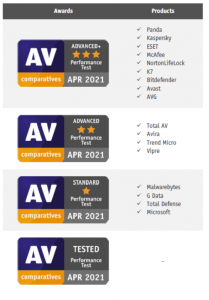 Users should always put higher emphasis on protection compared to speed. All tested products were fast enough to reach at least the “Standard” Award or better.”
— Peter Stelzhammer, co-founder of AV-Comparatives

INNSBRUCK, TIROL, AUSTRIA, May 5, 2021 /EINPresswire.com/ — AV-Comparatives today announced the formal release of its latest performance test results, evaluating the impact of anti-virus software on system performance. This independent testing lab is dedicated to inform users about protection against cybercrime with its systematic testing of the market’s most popular security software solutions. The company creates a real-world environment for accurate testing by utilizing one of the largest sample collections worldwide.

AV-Comparatives carried out its performance test on a low-end machine with an Intel Core i3 CPU, 4GB of RAM and SSD drives and Windows 10 20H2 64-Bit system. The tests were conducted with an active internet connection. Adequate measures were taken to minimize the factors capable of influencing the measurements and/or comparability of the systems. PC Mark 10 Professional performance testing suite was used to measure the system impact during real-world product usage.

According to AV-Comparatives, the reported data provides just an indication and may not be applicable in all circumstances because many factors can play an additional part. It has also been informed that users should always put higher emphasis on protection compared to speed and all tested products were fast enough to reach at least the “Standard” Award or better.

Summarizing the test results, AV-Comparatives co-founder Peter Stelzhammer said, “Users should weight the various subtests according to their needs. We applied a scoring system to sum up the various results. Please note that for the file copying and launching applications subtests, we noted separately the results for the first run and for subsequent runs. For the AV-C score, we took the rounded mean values of first and subsequent runs for file copying, whilst for launching applications, we considered only the subsequent runs.”

In autumn AV-Comparatives will release its sped-impact test for high-end systems.