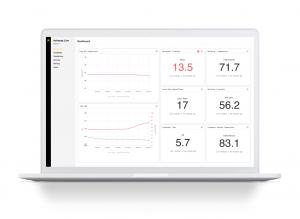 SAN DIEGO, CA, UNITED STATES, October 29, 2021 /EINPresswire.com/ — Avimesa Corporation, the Industrial Internet company, is introducing a powerful new feature that allows Avimesa.Live users to designate a sensor as readable by a group or all users. For example, a fire department could install safety sensors around a community and make the readings available, in real-time, to businesses and user groups in the community. Another example would be water quality and level readings that can be integrated into other sensor readings for water-side businesses.

The company will be testing the shared sensor features with beta users starting next week. Avimesa will market its Avimesa.Live Starter Kit and Avimesa Solar Field Hub to a variety of industrial customers and will be embedding key examples of the shared sensor technology. The company has an early emphasis on working yards. Avimesa defines a working yard as any type of outdoor/indoor facility that is at least ½ acre and is central to a business focus. Examples of working yards are Factories, Ports, Waste, Schoolyards, Parkland, Farms, Storage, Water, Venues, etc.

There is a movie on the StartEngine website about Avimesa capabilities:
https://startengine.com/avimesa

As part of the rollout, Avimesa is implementing its own network of publicly readable sensors with the initial tests being done in San Diego, California and Frankfurt, Germany. The initial shared sensor network will have air quality, river (Frankfurt) & bay (San Diego) water quality, temperatures, highway vibrations, solar cell efficacy, municipal water pressures, and a variety of sensors that are usefully shared among working yards to provide a wider view of their surroundings.

It should be noted that any sensor which can be detected using a simple multimeter is compatible with Avimesa. More sophisticated sensor options are available from both Avimesa and the aftermarket.

Additionally, many industrial working yards have difficulties taking advantage of Industrial IoT (IIoT) because they require a combination of perimeter awareness, and often solar, and LTE to be controlled by user-designed logic. For example, a security guard should only be sent a text alert when the gate opens when she is not in the guardhouse and it is after hours. Another example is to send a yard manager an alert if a forklift is left unattended by an open bay door.

Avimesa views consumer products such as an Amazon Echo as bellwethers of what industrial customers really need for ease of use. Many current IIoT products are difficult to install and configure for non-technical users. Avimesa is bringing consumer-level convenience to industrial customers. The $99 Avimesa Starter Kit can be installed by most users who have experience with home electronics — a dramatic shift in the user paradigm for industrial customers. The industrial markets are oftentimes very old and harken back to a time when most automation was not prevalent and they have to sensorize Things that were not designed to be connected to the cloud.

In addition to consumer-level ease of use for industrial customers, Avimesa offers a robust set of tools, such as Avimesa Gadget, and APIs to service developers who want to customize the Avimesa platform.

About Avimesa Corporation. Starting operation in early 2017, Avimesa focuses on an “Everything is Scriptable” approach. While the core high-performance technology is coded in C, the outer layers are done in appropriate renditions of JavaScript. Durability and accuracy are fundamental to Avimesa and have been proven with billions of sensor messages delivered via the Avimesa Messages cloud. Watch the Avimesa video at https://startengine.com/avimesa

All trademarks are the property of their owners. The contents of this press release may be used in whole or part for reporting in the news, blogs, and social networking.